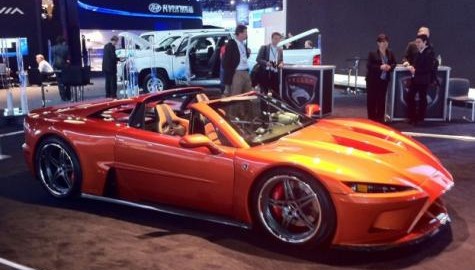 Many of the big fancy brands steer clear of the main floor at Cobo, and all of them throw a special pre-party at MGM Grand for the region’s fancy big-spenders, called “The Gallery.” All the usual suspects were present–Aston Martin, Bentley, Ferrari, Lamborghini, Lingenfelter, Maserati, Morgan, Rolls-Royce and others. Among the most interesting of these “others” was Falcon Motorsports, a company, best known for making body modification kits for Dodge Vipers, based in Holly Michigan, just north of Detroit. On display was the first production version of the F7 concept displayed at last year’s NAIAS .

F7 Concept
Falcon designed and produces the carbon-fiber two-chamber intake for the LS7 engine.VIN 001 runs a modified version of Chevrolet’s LS7 engine, upgraded with a custom carbon-fiber intake manifold that employs separate plenums for each cylinder bank and long intake runners. Along with a host of other improvements, the engine’s output jumps to 620 hp and 600 lb-ft of torque–plenty of oomph to motivate 2785 pounds of car. All that twist gets routed through a six-speed Ricardo transaxle like that of the late, great Ford GT. Like the Aventador parked nearby, all body panels are made of carbon-fiber. Unlike the Lambo, the frame is a hydroformed tube chassis and the body panels are made of pre-impregnated autoclaved sheet carbon fiber that only lends itself to very low volumes (the hope is to build 20 Falcon F7s per year, priced at $225,000). Most of the suspension is Corvette based.
Exposed aluminum elements from the monocoque give purposeful look to interior.The biggest visual change from last year is the interior, which gets a lot more supercar sparkle from the Spyker school of design. The gauges are in milled aluminum pods, mounted to aluminum arches that allow for adjustment of the gauge pods so as to be viewed through the steering wheel or over the top of the wheel (as shown here). The switchgear is also aircraft inspired, with toggle switches that include an ignition switch under a red protective flap. The Venzano leather interior is also of a much higher specification.
Elements of Ferrari design language are clearly present from behind.Company representative Jason Verbrugghe says the Falcon is an extreme car developed for serious drivers. Obviously a car this large weighing only 2785 pounds has little mass devoted to creature comforts and sound deadening. It’s all devoted to 6-piston calipers, big rotors, and that honking engine. We look forward to our first opportunity to test drive this mid-engine, Midwestern missile. For more info, www.FalconF7.com.
Headlamps are aftermarket units designed for the Dodge Avenger.